Now and Then
Now and Again
by Brenda Rothert

Now and Then
Now Emmaline Carson is a sharp, settled graphic designer who
loves painting, cooking and girls’ night out with her older sister Layla. But
then – in the years before she went to art school in Paris – she was a shy,
awkward teenager with frizzy hair, a flat chest and a massive crush on the boy
across the street, Cole Marlowe. Too bad her incredibly hot neighbor only had
eyes for Layla.Cole is now a confident, laid-back attorney who’s even hotter than he used to
be. He’s planning to stay single while working his way up the corporate ladder
– until he’s knocked off course by a chance run-in with Emma.Everything is different between Cole and Emma now. He finally sees her in a way
she only dreamed of, and their hot chemistry is fueled by a growing friendship.
But Emma’s deception of her sister – who wants Cole for herself – and the secret
Cole’s been keeping for more than a decade threaten to tear apart what’s only
just begun. Because sometimes the only thing standing in the way of now is then 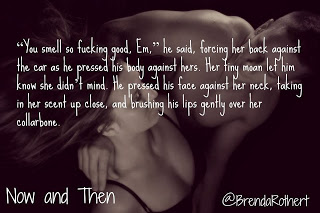 Now and Again
Once again, 26-year-old Layla Carson has the attention of a
man eager to satisfy her. Ben Montrose, the hot, confident cop who gets off on
frustrating her, is eager to show her just how arresting he can be. But as a
reforming sexaholic, Layla’s sworn off casual hookups, and doesn’t miss the
days of her early 20s –much.Ben’s caught off-guard when the sexy, outspoken attorney turns him on and then
turns him down. But the confident former Marine knows he can handle the simple
seduction of a beautiful woman. He finds Layla’s weak spot – competition, which
he happens to share – and challenges her to a game that could make them, or
destroy them.As they compete to crown the master of seduction, Ben and Layla discover
there’s more to their game than power and foreplay. But as the stakes go up,
they realize the game has changed, and they both stand to lose more than they
bargained for.
Tbird’s Review

Buy LinksNow and Then (Book 1)Amazon

Brenda Rothert
lives in Central Illinois with her husband and three sons. She was a daily
print journalist for nine years, during which time she enjoyed writing a wide
range of stories.

These days Brenda
writes New Adult Romance in the Contemporary and Dystopian genres.