When love became too much for Danielle Hamilton, she did what she does best—she ran. Now, three months later Dani realized the mistake she made. A lot can change though, in a short amount of time and now there’s an unavoidable factor in her life that will change everything. Will Dani be able to save the only good she’s ever known? Can she fight for the love she wants—or is it just too little too late?

Corey has spent the last several months missing the only woman he’s ever wanted, but things aren’t about to get any easier. When demons from Corey’s past rise to the surface, he is put in the middle of something he thought was laid to rest. When drugs, money and an ex that wants to stir up trouble—returns to the picture—Corey will be left fighting for his life. Will he be able to protect the only person he loves from a dangerous world she knows nothing about? Or will his past claim his life and inevitably…His heart.

Sometimes fate has its own ideas but will that be the end for Corey and Dani? Or will their fight for love prevail?

My car slowly pulled into the parking lot and standing directly outside the bar door was Gabby, even from afar I could see she was uncomfortable. That’s when I noticed behind her was the most amazing man I’ve ever known. Jeans, hoodie and a beanie—everything about his appearance may seem plain but not to me. This was perfect—he fit my fading memory of him perfectly. Strong jaw, downright sexy body and those piercing blue eyes. Even from afar I couldn’t miss those blues. They were all I thought about and now, they were staring a whole straight through me.

Gabby lifted a hand and coyly waved, as if she didn’t completely blow our cover. My heart was in my throat as I half considered turning around and speeding the hell out of this parking lot. But I knew I couldn’t, I was so drawn to this man and his intimidating glare that I couldn’t turn away if I wanted to.

When I stopped my car, Corey took hold of Gabby’s upper arm and led her to the passenger seat. He opened the door for her and helped her in. I watched in complete awe, not truly believing this was happening. That was when he looked into my eyes and my heart melted. I saw it there—behind that cold, hard stare was every ounce of pain and sorrow he felt. That I caused. I felt the air leaving my lungs as I was punched with the reality of what I did.

“Don’t you fucking dare drive away.” He scolded, before slamming Gabby’s door. My eyes locked onto him as he stalked around the front of my car towards my side. “I am so damn sorry, Dani!” Gabby practically pleaded with me to understand. Although I was pissed, I’d deal with her later because right now all I could think of was Corey—my Corey—I hoped.

In a second he flung open my driver’s side door and clenched the top of it until his knuckles turned white. He leaned in and the same scent of aftershave mixed with Corey hit me like a ton of bricks. I wanted to grab hold of his sweatshirt and breath in the smell I missed so much. It tickled my senses and my very-emotional-self wanted to break down and cry because of how damn much I really did miss him.

“What the fuck do you think you’re doing?” I opened my mouth to answer, but nothing came out. “You disappear for three goddamn months and you come back and what—test me!”

Unfortunately, it was the naturally defensive side of me that spoke up, not the apologetic side that should have made an appearance. “I was not testing you, I was just…”

Corey immediately cut me off. Steam practically billowed from his ears. “You just what, wanted to see if I would hook up with any willing chick thrown into my face?”

“No!” I yelled back. “I just…” Okay, maybe that was exactly what I did. “Fine! So what! I just got back today and I wanted to know if you were back to your old ways!”

“You left me hanging, thinking everything was going to be fucking phenomenal when I woke up. That everything was going to be fucking perfect—I finally had the only woman I’ve ever loved. Instead I wake up to a note that broke my fucking heart. Every single word pierced through me and left me with the aftertaste that I lost it all. So don’t you for one second think you can come back here and start throwing tests at me!”

Angry tears threatened to pour out. The fight, the phenomenal sex, and that note. It all came rushing back to me and I felt the air once again being knocked from my lungs. I couldn’t be here anymore—I needed to go home. Every harsh breath I took was filled with Corey’s scent and it made this situation that much worse.

Before I could say anything, he leaned in even closer and spoke again. “And for your information—no—I don’t fuck any random chick that walks into my bar. Want to know why?” It was clearly a rhetorical question since he gave me no chance to respond.

“Because I am foolish in love with this crazy woman who won’t stop running from me. I couldn’t forget her even if I tried and she’s the only one I want to be with. But she is too damn stubborn to let that shit happen.”

I don’t think I’ve ever been at such a loss for words as I was now. By some cosmic miracle—Corey still loved me—but I was still hurting him. I needed to do everything possible to rectify the situation before it was too late. Sadly though, I could hardly form a thought, let alone a sentence. My mouth hung open like a dead fish as I stared at the man I loved.

“Get your ass home, its cold as hell. You’re going to get sick if you keep driving around like a maniac.” Corey’s tone softened ever so slightly letting me hear the voice of the man I left behind. “Okay.” I whispered out. Corey sighed, the smell of mint brushed against my face. My eyes closed for a moment to hold in the smell—Lord—I was so pathetic. I opened my eyes in time to see him pull his beanie off his head.

“Wear a hat from now on. You don’t want to catch cold.” He said, as he adjusted the hat over my head. Pulling it down enough to cover my ears. We were inches apart and I wanted nothing more than to lean my lips into his—the way I used to so carelessly only months before. But I didn’t. Instead Corey backed away and took with him the warmth I craved from only him.

“Thank you.” I answered, my eyes locked on his. Willing him to see into the inner workings of my mind. To hear everything I couldn’t say at this moment. Corey went to shut the door, stopped, and looked down at me. “I’m glad you’re back.” With that he shut the door and returned inside the bar. Leaving me as a ticking time bomb—ready to break down at the slightest movement.

Fighting for You Prologue

Just let it go. Ollie’s voice rang into my ear as his lips slobbered up the ridge of my ear. For half a second I considered giving in to his advances—but I couldn’t. Part of the reason was because the ringing of my cell phone had my body on edge, wondering who it could be. Truthfully though, the main reason was Corey. Maybe it was my choice to walk from him—okay, sneak away from him—this morning, but that didn’t mean I didn’t love him. I knew I’d be leaving and I knew I was scared. But with Ollie kissing up on me—it reaffirmed my already solid opinion—it was only Corey I wanted.

“I have to get that.” I shoved Ollie away and in a panic I lunged for my phone. If that was Corey calling, I needed to answer. I would tell him my revelation and that he was the only one I would ever want. Then I would apologize profusely for—well—everything. The second the phone touched my fingers, I answered the call. I didn’t register who was calling just as long as the call didn’t go unanswered.

“Hello?” Ollie was protesting behind me but I ignored it. There was only one sound I wanted to hear and it wasn’t his voice. “Danielle?” The voice was one I recognized but not one I expected. “Oh, hi Erik, how are you?” I felt my mood spiraling downwards. This was the call I had been waiting for but now with the realization that it was Corey I wanted—it was this call I was dreading.

“I’m doing just wonderful! We need to talk though, my darling!” I looked over my shoulder at Ollie, standing hands on his hips with a look in his eye that said he was not happy I chose to take this call. “We do. Can you please give me a moment?”

“Thanks.” I put my phone on mute and turned my full attention to the unhappy man standing feet away. “I need to take this call.” Ollie’s harsh expression softened.

“Oh well, not a problem! I can wait in the bedroom.” Yeah—so not what I meant.

“You can’t be serious!” He retorted.

“But Dee…” I held up my hand to silence him. There was nothing he could say to change my mind, so there was no point trying.

“Please go, see yourself out the way you let yourself in.” After a little more huffing and puffing—he stomped off. I averted my attention back to Erik. “Sorry about that, Erik.”

“It’s no problem, but Dani—I need you back.”

This was no surprise but quite honestly the reality of the situation was a slap in the face. My life here had truly only been a fragment of time that left my life altered in a way where I knew I would never be the same. Corey was a flash of lightning in the dark sky. He came and went so quickly you almost wondered if it wasn’t made up. But that one stunning and captivating moment left in an imprint in the mind that wouldn’t soon be forgotten. No matter what—I knew Corey would never be forgotten.

“Well that’s good, Erik, because it’s time for me to come home.” 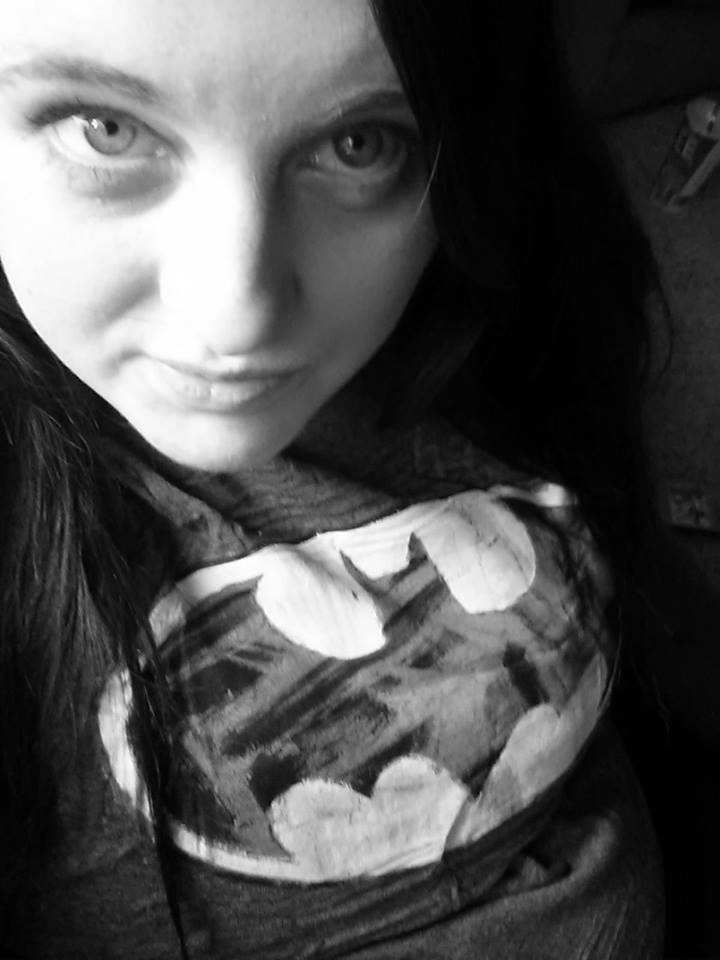 I am Megan Noelle and “Fighting For You” is my second novel that I will publish but not the first I’ve written. I have been writing since I was old enough to hold a pen and finally pursued my dream of becoming a novelist. Writing is my passion and I am all for following one’s passions!

One of my other passions is being a mom of my adorable daughter Peyton. She has just hit the terrible twos and boy…what a joy! When I’m not writing I’m a stay at home mom and a full time student in the typical major of “Undecided.” All I know is if I can write, be with my daughter and my family—I will be happy!

5 Random Things You Don’t Know About Me!

1. Peanut Butter M&Ms and a Diet Coke is my favorite treat—ever.

2. I would someday love to write a book that Tim Burton wants to make into a movie!

3. I have a ridiculous addiction to Bride shows.

4. I have a terrible habit of wanting to dye my hair—every month.

5. I can listen to the same song on repeat dozens of time in a row and still not be sick of it.