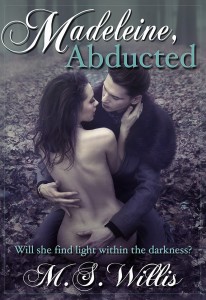 She was meant to be his destruction…
A pawn played in a perilous game between
father and son…
Yet, her strength was more than either
man could imagine.
As Maddy learns to save herself…
She becomes the one thing that could
set the son free.

Madeleine Clark was raised to become a concert cellist. Sheltered and naïve, she remains hidden behind her music, a protection from the world around her. On the night of her first solo performance, Maddy accepts the admiration of a stranger and finds herself captive in a cruel and twisted power struggle between a sadistic father and his son, Aaron.

Seemingly, dangerous and uncaring, Aaron manages the business operations of his father’s estate. Wanting nothing to do with the slaves kept at the Estate, Aaron refuses to take part in the deeper depravities of his father. Despite his resistance, Aaron’s father ‘gifts’ him with a petite, brunette woman he can’t refuse.

A bond forged in conspiracy and deceit, Aaron struggles to save Maddy by teaching her to survive in the world in which he’d been raised. An unlikely union, Aaron soon learns that great strengths can exist within small packages, while Madeleine learns that love and light can exist in the darkest of places.

Five stars just isn’t enough for this book that takes us from the blackest evil to the purest light in seconds and we never know what path we are on.

My mind is still spinning after this read.  I found myself wanting to hate Aaron, but I couldn’t. His whole purpose was to save Maddy even when it broke his heart and drove him closer to insanity. Every time I thought Maddy was going to give up and die, she came out fighting like a lion. You never knew what direction the author was going to take you. After being sucked in by the first chapter, I found I was just along for the ride after that. I couldn’t put it down, but I feared going forward, not knowing if I could handle the end. (which by the way, it was a ride of a life time)

Maddy was living her life as a cello player and performing in concerts. Little did she know the attention she was drawing from one man would be enough to make her the pawn in one of the most evil games I have ever seen written. A father whose mind is so far gone, uses Maddy to break his own son. In an environment where love was not easily found, Maddy had to reach deep within herself to sort out the new emotions that became the norm for her life. Maddy used her cello as her voice, she preferred to remain silent in a world of noise and escape into the place her music took her.  Now she was going to have to find that inner voice that would remind her to survive, to accept her fate in this world called The Estates. Not only accept, but she was going to have to find the courage to battle against the demons that wanted to break her.  Where it would have been easy for her to give up and die, she continued to find the strength to go one more day, till that strength became fire to survive and win.

Aaron hates his father and knows this game all to well. He knows what is expected of him and what the rules are, but what he doesn’t know is how to protect Maddy while he tries to live in his father’s world. The Estate is set up for his fathers satisfaction, not only in the sexual department but in every other area of his father’s life. If he turns his back on Maddy, she will become a sex slave and soon be killed. If he plays the game, he is going to have to hurt and use Maddy, which makes him ill to even think about. Aaron once knew the feeling of being loved and cared for, but his mother was gone now, as was his freedom to play the music she taught him.  Maddy gives him back that small piece of love and life, that piece he had before his father took over his world.  If it wasn’t for his friend and body-guard he would be alone in this world, until he realizes Maddy’s wishes aren’t as different as his.

The author shows us that sometimes when backed in the corner of life, you walk a very fine line between becoming the monster you are expected to become or doing what you need to do to protect the innocent. Those lines get blurred in this book but it is always clear that goodness is worth the fight. It would be easy to become the monster of revenge or to go along with the crowd you are in for your own protection, but Maddy and Aaron remain focused on eliminating the world of the evil known as Aaron’s father. This meant at times they had to do and endure unspeakable things, but their focus never changed.

As always this author takes you on a path of twists and turns that leave you breathless, speechless, in tears and even cheering loudly at times. She never gives you a book that doesn’t affect your mind and heart, changing how you feel and think about life and situations. This one reminds us that sometimes forgiveness isn’t always enough. Sometimes you have to take a stand and fight back, and sometimes we have to forgive ourselves of what we needed to do to survive.  I couldn’t put this book down once I started it. Ms. Willis weaves a story that takes us from the blackest evil to the purest light in seconds and we never know what path we are on. Once I had finished the book the only word I could use for a while is WOW when thinking of the story and characters.

So many times I forgot who the good guy and the bad guy was because I was in such turmoil  while reading. I will give a warning now, this book isn’t for the light weights. If you are wanting a happy ever after this isn’t for you, but if you love being sucked into a world of darkness and evil and not knowing which way is out for a while then you have a winner. It is intense, deep, dark and powerful, just as most of her books are. Watching Maddy sort out her feelings and decide that the best choice could be her last choice brought me to a point I wanted to scream and hide. Reading about Aaron give up his soul to save Maddy made me cry and hate him, but I couldn’t hate him for long because I understood what he was doing. It ripped my heart out watching him do whatever it took to save her life. I think if you want an intense ride, this is the book to give that to you. I LOVE this book, even if it did take me days to recover from it. Awesome read, I highly recommend it, just be prepared to never be the same after you finish the last page.

Finding her voice, Maddy spoke out of turn, not thinking about the repercussions her words could elicit.  “I would prefer you call me by my name.”  She peaked up at him through her lashes.  “Maddy, I would prefer that you call me Maddy.”

Aaron stopped with his bare back turned to her, taking several minutes to finally respond, he asked, “What makes you think you are allowed to ask that?  If I wanted, I could call you slave…”  He turned to face her, the contours of chest perfectly shadowed, his strength unquestionable.  “…or whore.”  His swagger was slow as he approached her, a hunter skilled in pursuit.  “Would you prefer those names to ‘Mouse’?”

Sucking her bottom lip between her teeth, Maddy fidgeted with her hands, refusing to look Aaron in the eyes.  She could feel his gaze touching her skin, his perusal of the woman barely half his size.  The heat of his body rolled off of him as he circled her.  It was the feeling of a soft blanket and lustful threat wrapped around her at the same time.  When the deep resonation of his voice occurred again, she cringed, fearing he would strike out at her for the incorrect answer.  “Why do you dislike the name I have given you?”

Continuing to fidget, Maddy trained her eyes on her feet, not daring to look up into the endless green she knew stared down at her.  Gripping her under her chin, Aaron pulled her face up to look at him, his eyes searching hers for the answer to his question.  “You will speak when I tell you.”  Dropping his hand from her face, he took a step back placing distance between them.  “Now answer me.”

Her heart pounded against the walls of her chest, her throat constricted, making it difficult for her to breath.  Fear consumed her as she stood in the shadow of the man who’d taken at least two lives that day.  Barely a whisper, her voice squeaked out the answer to his question. “Because a mouse is a furry little rodent, something detested.”

Aaron stood thoughtful and silent above her.  When he didn’t respond, Maddy quietly added, “I guess it’s better than Xander’s name for me.”

Laughter bellowed out, causing the toned muscles of Aaron’s broad chest to flex and relax before her eyes.  The sound of his amusement so real, it caused her to want to smile in response to seeing a piece of his mask falling away, revealing parts of him not witnessed by many people.  Containing himself, Aaron’s eyes sparkled as he asked, “And what, exactly, is Xander’s name for you?”

A scowl creased the fine skin between her eyes, her mouth pulled into the pout of a sulking child.  “He calls me ‘cricket’…an insect.  It’s odd that you both refer to me as nothing more than a common household pest.”

Aaron’s smile faltered as he looked down upon the beautiful girl who didn’t fully understand her role.  “No, Madeleine, you are not a common household pest…”

Maddy looked up at him, anticipating what he would say next.

For a fleeting second, he looked genuinely amused, but his expression was quickly replaced with indifference and contempt as he stated, “you are lower than even a pest in your role as a slave.”

M.S. Willis is a romance novelist whose debut novel, Control, was released in 2013.  Although currently writing in the romance genre, Willis has plans to expand her literary pursuits into multiple genres and has no fear conquering difficult subject matters in her writing.  Willis is a native Floridian who is also a photographer and musician.  When not absorbing herself in written, visual or musical expression, Willis is an adrenaline junkie, a ‘closet’ video game enthusiast, and an avid outdoors person and nature lover.